Probiotics are microorganisms that offer some form of health benefit to the host – they can be found in various different foods. Probiotics are believed to play very important roles in regulating proper intestinal function and digestion – by balancing intestinal microflora.

These ‘good bacteria’ are considered to be “live microorganisms which when administered in adequate amounts confer a health benefit on the host”, according to the World Health Organization1.

Probiotics are normally consumed in fermented foods with active live cultures such as yogurt.

Probiotics are also available in supplement form as capsules, liquid and chewables. There are many different strains of probiotics, but the most common strains available today in are Lactobacillus and Bifidobacterium. 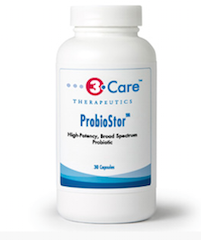 What are the health benefits of probiotics?

Certain strains of probiotics have demonstrated positive results in treating diarrhea and gastroenteritis. According to a report published in the Journal of Pediatric Gastroenterology and Nutrition2, probiotics are “useful in the prevention or treatment of several gastrointestinal disorders”, such as infectious diarrhea, antibiotic diarrhea, and traveler’s diarrhea.

One study published in the Journal of Pediatrics3, concluded that  Lactobacillus species are a safe and effective form of treatment for children with infectious diarrhea. The researchers concluded that “Prophylactic use of Lactobacillus significantly reduced the risk of nosocomial diarrhea in infants, particularly nosocomial rotavirus gastroenteritis.”

However, researchers from the University of Swansea, Wales, UK, reported in The Lancet that probiotic supplements do not reduce antibiotic-associated diarrhea in seniors.

Probiotics may be beneficial for brain function. Researchers at UCLA found that brain function improved among healthy women who regularly consumed probiotic-containing yogurt.

Lead author of the study, Dr. Kirsten Tillisch, said “Many of us have a container of yogurt in our refrigerator that we may eat for enjoyment, for calcium or because we think it might help our health in other ways. Our findings indicate that some of the contents of yogurt may actually change the way our brain responds to the environment. When we consider the implications of this work, the old sayings ‘you are what you eat’ and ‘gut feelings’ take on new meaning.”

In addition, probiotic bacteria might have the potential to change brain neurochemistry and treat anxiety and depression-related disorders, according to a study published in the journal Proceedings of the National Academy of Sciences (PNAS).

Research presented at the American Heart Association’s Scientific Sessions in 2012 revealed that a formulation of Lactobacillus reuteri NCIMB 30242, is able to reduce blood levels of LDL or “bad” cholesterol.

Some studies have found that milk fermented with strains of LAB may help lower blood pressure.4

A study published in the prestigious scientific journal PNAS (Proceedings of the National Academy of Sciences), found that probiotic bacteria can protect against bacterial infection.

The research was the first of its kind to demonstrate that Lactobacillus salivarius offered significant protection against Listeria infection.

Scientists at University College Cork, Ireland, reported in the journal Gut Microbes that Bifidobacterium infantis 35624 may also have benefits for patients with psoriasis and chronic fatigue syndrome.

Bifidobacterium infantis 35624 is a probiotic available in the USA for fortifying the digestive system.

This study is significant, the authors added, because it shows that a single probiotic can affect the systemic immune system in humans, and not only the mucosal immune system.

Probiotic cultures naturally occur in certain fermented foods. Below is a list of different strains of probiotic bacteria.

How to Know When Your Gut is Out of Whack and Needs Probiotics ASAP!
April 15, 2019

Probiotics Could Lower the Risk of Pregnancy Complications
April 15, 2019

Probiotics Promising for Mild to Moderate Depression
May 17, 2017